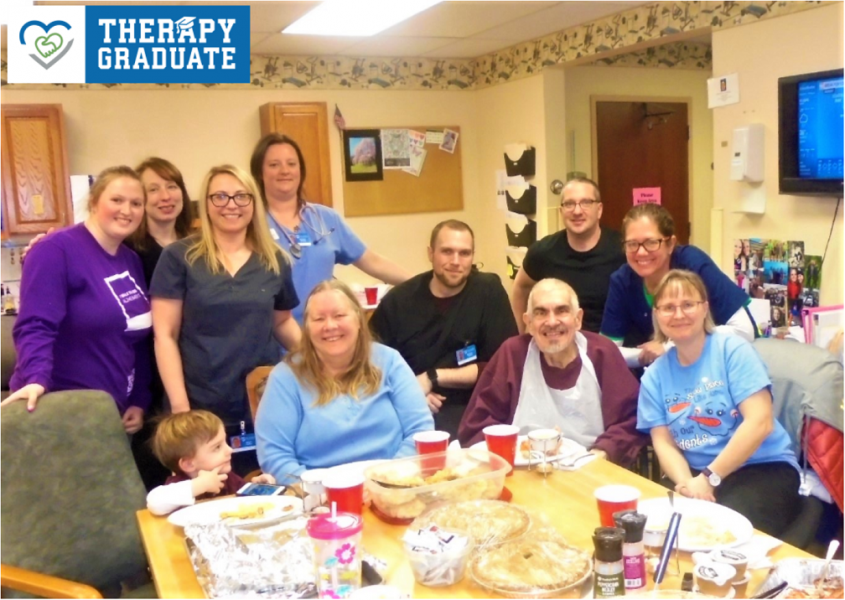 John Singer, 66, was admitted to the hospital after a fall down steps at home which resulted in multiple rib fractures, shortness of breath, and pulmonary compromise. To make matters worse, John’s hospitalization was complicated by respiratory failure requiring intubation and ventilator dependence for a considerable amount of time.

John was came to The Gardens at East Mountain on 2 liters of oxygen as needed. He was admitted into Skilled Therapy Services as well as the Pulmonary Rehab Program. Upon admission, John presented with decreased upper and lower body strength with both balance and activity tolerance impairments highly impacting his functional mobility. He required Maximum Assistance to perform bed mobility and transfers with the ability to walk 100 feet with utilization of a Rolling Walker and Minimal Assistance.  John required total dependence to perform self care and toileting.

John received Physical, Occupational, and Respiratory therapy services during his stay where all disciplines began to see a significant change in both his physical mobility and his outlook on life.  John soon transitioned to room air and progressed in his respiratory status with use of incentive spirometry, acapella, and the Respiratory Muscle Trainer. John no longer required encouragement to get out of bed to participation but began wheeling himself down to the therapy department on his own making his own schedule with the therapists.  As his strength and endurance began to improve, John’s motivation sky rocketed, and he began to plan what he was going to cook for the therapy department to show off his culinary skills.

John progressed in performing his self-care to complete independence while his OT focus progressed to homemaking tasks.  He was now able to walk around the entire building with a Rolling Walker.  Upon his discharge from the Gardens, John was Independent for all aspects of functional mobility with and without the use of a rolling walker and had the ability to negotiate a full flight of stairs independently.

John cooked the therapy department Monte Cristo Sandwiches, Jalapeño Western Omelets, and his Grand Finale of Lobster Dinner! John’s wife and grandson Liam were invited to The Gardens at East Mountain first ever Lobster Fest.  The therapy department donated the lobster and all the fixings and John cooked it to perfection independently without an assistive device.

There was no other day more appropriate for John Singer to DC home with the love of his life other than Valentine’s Day.  John walked to his own car completely independent leaving us all with the satisfaction of a job well done but knowing that we will never be able to top John Singer’s 2019 Lobster Fest!